Over a year ago, we did a remote demo of our patented moving target shooting simulator for about a dozen personnel at the Army’s Synthetic Training Environment (STE) group in Orlando. STE is responsible for the Army’s VR and AR training programs. What they didn’t have at the time was a reliable way to teach spatial aim points (ie. lead) on moving targets. They were intrigued with our patented commercial solution and asked some great questions. The program manager in charge left shortly thereafter, but the Army’s desire to train on moving targets continued. They have issued two prototype contracts to demonstrate marksmanship training in a simulator, and, lo and behold, the requirements include shooting at moving targets – something the Army has never trained for at the range. Shown in the chart below are some of the required spatial leads on some of the targets – up to 15 feet at 500 meters. Almost 2 feet at 100 meters. Any amount of lead is worth displaying in a 2D projector, VR headset or AR display.  The Marines are ahead on training on moving targets, but the Army is starting to catch up. Spatial aim points can be trained in 2D simulators or in VR headsets. And that training can be deployed in AR headsets. Very 21st Century 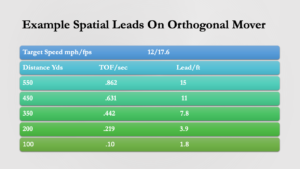 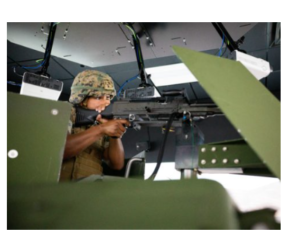