In displaying the phantom clay (not just the other clay), the Lead Tech user will be training themselves to anticipate where the clay is going by seeing its phantom moving ahead of it. 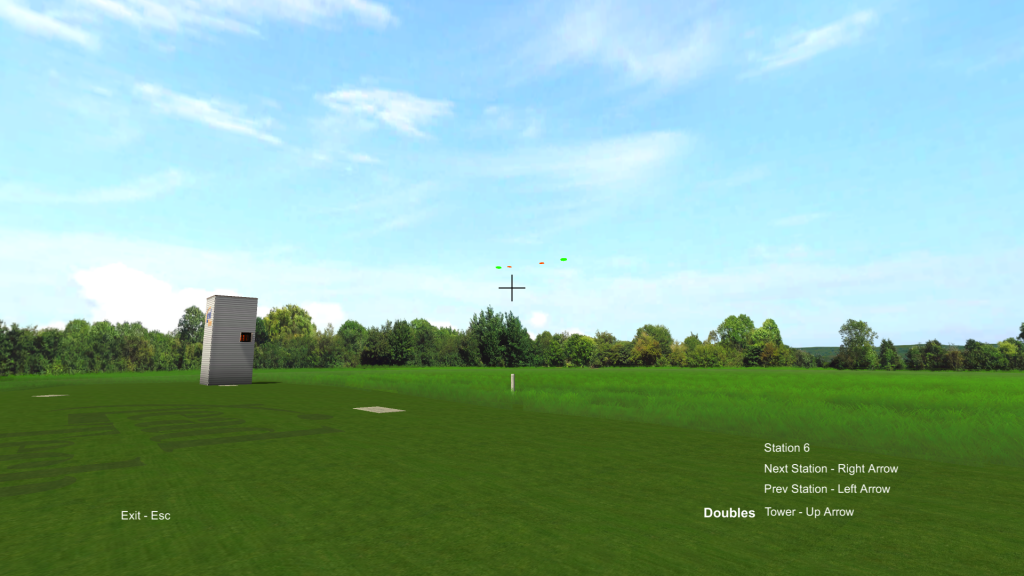 This is by no means a new concept. One of the first people to articulate it was Nash Buckingham, the all-American footballer, sportsman, naturalist and author. Nash explained lead as visualizing a moving spot in front of the target. Not at the target. If this sounds obvious, it should, because it’s the foundation of sustained lead, which is how most top shooters lead the target. Swing-through can yield good results, particularly in the field, but both require the correct visualization of angular lead.

The catch is to visualize the lead. Lead Tech shows the shooter the ballistic intercept point. Visualizing that lead is reinforced via kinesthesia, muscle memory. This can be learned by looking at the phantom clay in hard focus and using the real clay and muzzle as reference points, in soft focus. Or by looking at the real clay and holding the phantom (an muzzle) in soft focus.

Unlike hand gunning, looking at the target, the clay, is whole lot better than looking at the front sight or muzzle. But teaching hard focus  alone on the clay itself may have come from the axiom of “keeping your eye on the ball” in baseball. To emphasize this, some baseball coaches teach “focus on the seams” of the ball, and this has been translated as “focus on the ridges” in clays. Focusing exclusively on the object is essential in baseball, cricket or football, particularly when catching, because your glove is the intercept point;  you don’t look at your glove, you know where it is. Usually. Same applies to batting, the bat is the intercept point. Sometimes. Over 33% of the time if your name was Ty Cobb. Or golf, where the intercept point is fixed.

Focusing exclusively on a clay’s ridges would be a really great idea if you were trying to catch the clay. Otherwise, at best, it’s inefficient, since the only way the intercept point would be learned is via trial & error. Telling novices to focus on the clay may account for the attrition rate in clay shooters – they focus on the clay as told – and miss behind.  At Lead Tech, we think it’s more productive to display the correct lead from the outset, not have to guess at its position while hard focusing on the clay.

Recent advances in sports psychology and in particular the measurement of eye movement in sports have proven that Nash Buckingham was right: top athletes not only anticipate movement, and their ability to anticipate is evidenced by where they are looking. In plain English, they are looking at where they think the object – the ball, their opponent’s feet or hands, the clay – is going to be, they are not focusing on where the object is now. They are quite literally visualizing the future.

This equates to hard focus on where the clay is going, soft focus on the clay as reference point. Which is why the Lead Tech method teaches focus on the phantom clay. Elite athletes think ahead and look ahead. They may not articulate that as succinctly as Nash Buckingham, but that’s what the eye tracking cameras reveal:

We look forward to incorporating similar eye tracking glasses into our Lead Tech system to determine where shooters are looking. We imagine that some shooters are looking at the clay and visualizing lead via their peripheral vision (the position of the gun barrel to the clay), some are looking ahead at where the intercept point is, and some are looking back and forth between the clay and the intercept point. Our guess is that the better the shooter is, the more likely they are to look ahead of the clay. That would square with the results from other sports.

This video reveals a top soccer player’s ability to see where play is going, by using the ball as a reference point. His amateur opponent focuses more on the ball, not where the ball is going, with predictable results.

This player is so good at anticipating where the ball is going to be that he can execute successful kicks in the dark. Would not attempt to replicate this feat at the local skeet range: